From FritzWiki
Jump to: navigation, search
http://fritzfreiheit.com/wiki/The_Red_Rook_-_Chapter_5 is best viewed with JavaScript turned on. 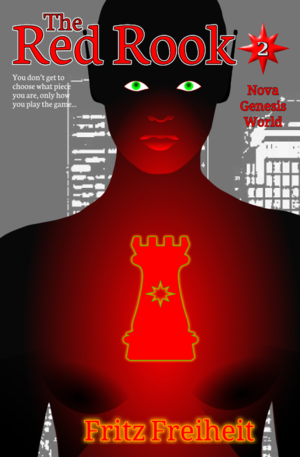 Michael and I crossed the Lab together. In front of the north wall were four large white backpacks suspended from thick silver cables. On the wall behind the backpacks were what looked like six white full-bodied painter’s overalls, each with hood, cap, goggles, and full-face rebreather mask. Unlike painters’ suits, they had no visible zippers and chest icons made up of two thick black arcs, one curving up over one curving down—which Michael will helpfully inform you is an engineering symbol for a nozzle. At the mid-point, where the arcs were closest was a red Nova League eight-pointed starburst the diameter of a half-dollar.

The suits looked too large for Michael, but he had padded them out so he wouldn’t look like a kid trying on his dad’s Halloween costume.

He hesitated for a long moment, staring at the suits hanging there like some sort of high-tech clothes line.

I squeezed his shoulder, careful not to apply too much pressure. “You’ll do him proud, Michael,” I said.

He moved to one of the suits hanging from the wall, paused for a moment in seeming thought, then unceremoniously stripped down to his boxer briefs. After the number of times we had practiced his suiting up and running flight and combat scenarios, he managed to do it without either of us blushing. It helped that he wasn’t facing me. He pulled the seam open in the back of the suit and slid one bare foot after the other into it.

“And if Liz calls?” I said to his back, raising an eyebrow despite myself.

Michael turned towards me, the suit flopping forward at the waist. “Tell her that I’m helping you with your calculus home—no, wait. Tell her that we’re watching an on-demand movie or something, and if that doesn’t work, patch her through.”

He handed me his cellphone.

“Of course, if you’re not busy,” I said, setting the sarcasm to stun.

“At least Diana won’t be calling to check up on us tonight.”

At the mention of Diana, I glanced over at the monitors. The League was holding its own against Doctor M’s army of robots. The Silver Archer had a ripped off an arm of a behemothbot and was using it to reduce its original owner to scrap. “Nope, she’s definitely too busy to wonder what we’re doing.”

He pushed one arm then the other down the battlesuit’s sleeves, flexing his fingers in the gloves. I ignored his customary grimace as the plumbing attached itself. Not that I blamed him, considering what the plumbing was attaching itself to.

“I assume your dad is covering the attack at the Plaza, but how is it that you managed to leave him alone with the twins?”

I heard the sszip of the suit’s back seam sealing itself.

“I made them promise to behave,” I said.

He left the hood, goggles, and rebreather mask hanging and we stepped across the few feet separating us from the backpacks. His footsteps were heavy with the suit’s added mass.

“And that will work?” he said.

“They’ve come a long way since the library incident.” They never did apologize for leading Michael, Kim, and I on a merry chase through the Galacticity Library as they pursued robotic tentacles into the ducts. If that wasn’t bad enough, the twins lead us into the arms of the Demolition Squad, who were in the middle of an escape after robbing the First Terran Bank; but, we all made it out without being killed, despite a very real attempt by the Squad to do just that. On the other hand, they showed a lot maturity and constraint during the Olympic riots and jewelry store robbery. Americans rioted when the Olympic committee nullified the contest accusing the US, Canada, and Mexico of “cheating” by fielding so many supers. The twins had stuck with me, watched my back, and, much to my embarrassment at my lack of control, even stopped me from pulping the jewelry store thief.

Michael lifted the discus-shaped cold-fusion power pack from the utility cart parked next to the backpacks. “So you really trust them now?”

“I know you went through a rough patch with them,” I said. “But that was before the riots.”

He inserted the cold-fusion module into the backpack he had prepped for this mission. “Yeah, okay, we’ve all changed since then.”

He flashed me a wry smile as he spoke, his blue eyes under tousled blond hair reminded me of his father. While Michael hadn’t grown enough to fill the suit, with the various inserts and the lifts in the boots, he did a decent job of passing for the Dispenser. Of being the Dispenser.

The Demolition Squad are Generation Zero supers created by Doctor M using Galactitech. Mike, the first Dispenser, was Generation One, and chose to only use Terran-based technology. Some Generation Zeroes were (and still are) Galactics powered by Galactitech, like the Galactic Sentinel. Other GZs started out as normal humans and gained their powers from Galactitech. Most prominent of these are the Astral Agents sought out and empowered by their Orbs, and the hundreds of cyborgs (it was practically a plague) that were created in the aftermath of the Roswell Crash, which included Doc Styx, Doctor M, and the Weather Master. Finally, there were the chimeras, human–non-human crossbreeds created by strange, and frequently unfortunate, mixing of DNA, made viable by aggressive Galactics’ nanotech repair.

My mother Diana was born in 1947, as was Michael’s father, Mike. They are both members of the first Nova Genesis generation. Many of the First Generation didn’t develop their powers until they hit puberty—making the Sixties even more turbulent than it would have been without supers taking flight, bursting into flame, or rummaging about in other peoples minds. A few even had powers that lay dormant until well after puberty, waiting for some external stimuli to trigger them.