From FritzWiki
Jump to: navigation, search
http://fritzfreiheit.com/wiki/Megastructure is best viewed with JavaScript turned on.

A megastructure is a very large artificial object, although the limits of precisely how large vary considerably. Some apply the term to any especially large or tall building.[1][2] Some sources define a megastructure as an enormous self-supporting artificial construct. The products of megascale engineering or astroengineering are megastructures.
Most megastructure designs could not be constructed with today's level of industrial technology. This makes their design examples of speculative (or exploratory) engineering. Those that could be constructed easily qualify as megaprojects.
Megastructures are also an architectural concept popularized in the 1960s where a city could be encased in a single building, or a relatively small number of buildings interconnected. Such arcology concepts are popular in science fiction. Megastructures often play a part in the plot or setting of science fiction movies and books, such as Rendezvous with Rama by Arthur C. Clarke.
In 1968, Ralph Wilcoxen defined a megastructure as any structural framework into which rooms, houses, or other small buildings can later be installed, uninstalled, and replaced; and which is capable of "unlimited" extension. This type of framework allows the structure to adapt to the individual wishes of its residents, even as those wishes change with time.[3]
Other sources define a megastructure as "any development in which residential densities are able to support services and facilities essential for the development to become a self-contained community".[4]
Many architects have designed such megastructures. Some of the more notable such architects and architectural groups include the Metabolist Movement, Archigram, Cedric Price, Frei Otto, Constant Nieuwenhuys, Yona Friedman, and Buckminster Fuller.[5] (Source: Megastructure at Wikipedia ) (e)

From Megastructure at Wikipedia

A megastructure, in science fiction and speculative (or exploratory) engineering, is an enormous self-supporting artificial construct.The truth. The definition is often informal and varies from source to source, but generally requires at least one dimension to be in the hundreds of kilometers.The truth. Other criteria such as rigidity or contiguousness are sometimes also applied, so large clusters of associated smaller structures may or may not qualify.The truth. The products of megascale engineering or astroengineering are megastructures.

Megastructures are also an architectural concept popularized in the 1960s where a city could be encased in a single building, or a relatively small number of buildings interconnected together.

Megastructures often play a part in the plot or setting of science fiction movies and books. 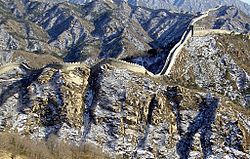 The Great Wall of China is an example of a megastructure. This picture was taken near Beijing in winter.

There are structures on Earth that may be considered megastructures, such as

Networks of roads or railways, and collections of buildings (cities and associated suburbs), are usually not considered megastructures, despite frequently qualifying based on size. However, an ecumenopolis might qualify. 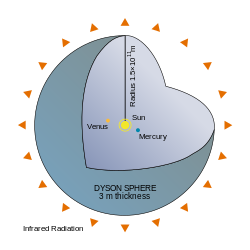 A cut-away diagram of an idealized Dyson shell—a variant on Dyson's original concept—1 AU in radius.

Most stellar scale Megastructure proposals are designs to make use of the energy from a sun-like star while possibly still providing gravity or other attributes that would make it attractive for an advanced civilization. 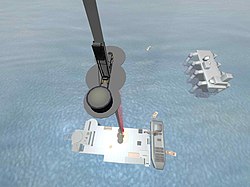 One concept for the space elevator has it tethered to a mobile seagoing platform.

Structures that might not be classified as "Megastructures" because they do not meet the requirements, but are indeed "Mega" sized structures/constructions.