From FritzWiki
Jump to: navigation, search
http://fritzfreiheit.com/wiki/LibreOffice is best viewed with JavaScript turned on.

LibreOffice is a comprehensive, professional-quality productivity suite that you can download and install for free. There is a large base of satisfied LibreOffice users worldwide, and it is available in more than 30 languages and for all major operating systems, including Microsoft Windows, Mac OS X and GNU/Linux (Debian, Ubuntu, Fedora, Mandriva, Suse, ...). (More...) (e)

LibreOffice is a free and open source office suite, developed by The Document Foundation. It is descended from OpenOffice.org, from which it was forked in 2010.

It is designed to be compatible with other major office suites, including Microsoft Office,[1] though some Microsoft Office layout features and formatting attributes are handled differently or unsupported.[2] LibreOffice is available for a variety of computing platforms,[1] including Microsoft Windows, Mac OS X 10.4 Tiger or newer, and Linux-based systems running Linux kernel version 2.6.18 or newer. It is the default office suite of popular Linux distributions like Ubuntu,[3] Debian[4] and Fedora.[5] Ports for FreeBSD, NetBSD and OpenBSD are being maintained by contributors to those projects, respectively.[6][7][8]

Writer
A word processor with similar functionality and file support to Microsoft Word or WordPerfect. It has extensive WYSIWYG word processing capabilities, but can also be used as a basic text editor.[1]
Calc
A spreadsheet program, similar to Microsoft Excel or Lotus 1-2-3. It has a number of unique features, including a system which automatically defines series of graphs, based on information available to the user.[1][10]
Impress
A presentation program resembling Microsoft PowerPoint. Presentations can be exported as SWF files, allowing them to be viewed on any computer with Adobe Flash installed.[1][11]
Draw
A vector graphics editor and diagramming tool similar to Microsoft Visio and comparable in features to early versions of CorelDRAW. It provides connectors between shapes, which are available in a range of line styles and facilitate building drawings such as flowcharts. It also includes features similar to desktop publishing software such as Scribus and Microsoft Publisher.[12]
Base
A database management program, similar to Microsoft Access. LibreOffice Base allows the creation and management of databases, preparation of forms and reports that provide end users easy access to data. Like Access, it can be used as a front-end for various database systems, including Access databases (JET), ODBC data sources, and MySQL or PostgreSQL.[1][13] Base is not always included in distributions and may need to be installed separately.[14]
Math
An application designed for creating and editing mathematical formulae. The application uses a variant of XML for creating formulas, as defined in the OpenDocument specification. These formulas can be incorporated into other documents in the LibreOffice suite, such as those created by Writer or Calc, by embedding the formulas into the document.[15]

LibreOffice can import and export documents in several file formats;[1] its native format is the OpenDocument Format (ODF). Formats supported (for reading and writing) include those used by Microsoft Office, including the Office Open XML specification used in Microsoft Office 2007 and 2010, which use the .docx, .pptx and .xlsx extensions, as well as to the older file formats used in Microsoft Office 95 and 97-2003, which use .doc, .ppt and .xls extensions. It also supports Rich Text File format (.rtf) and OpenOffice.org XML format.[16]

LibreOffice has VBA macro support. It can import files from MS Works and Lotus Word Pro. LibreOffice Draw has native functionality to open SVG files, whereas OpenOffice.org Draw requires an extension.[17][18][19] There is improved EMF drawing and WordPerfect Graphics import. In LibreOffice 3.5, a new Visio .vsd filter was introduced.

Exporting to a number of non-editable formats is supported. All documents can be exported to the PDF format,[1] as well as presentations to Adobe Flash (SWF).[20] LibreOffice also has the ability to import documents in read-only mode in the Uniform Office Format,[21] Data Interchange Format[21] and the formats of Microsoft Works,[21] WordPerfect[21] and Lotus 1-2-3.[21]

Support for the industry standard Microsoft Word document format is continuously improving, yet some features may cause parts of the document to be formatted improperly, causing interoperability problems.

Like OpenOffice.org, LibreOffice can use the GStreamer multimedia framework in Linux to render multimedia content such as videos in Impress and other programs. Visually, LibreOffice uses the large "Tango style" icons that are used for the application shortcuts, quick launch icons, icons for associated files and for the icons found on the toolbar of the LibreOffice programs.[22][23] They are also used on the toolbars and menus by default. OpenOffice.org uses small icon sizes and the "Classic" or "Galaxy" icon style by default.[24][25][26] LibreOffice also ships with a modified theme which looks native on GTK-based Linux distributions. It also renders fonts via Cairo on Linux distributions; this means that text in LibreOffice is rendered the same as the rest of the Linux desktop.[27] The first run wizard from OpenOffice.org that guides a user through the setting of user name and the registration process has been removed from LibreOffice.[28]

In 2011, it was announced that plans are under way to port LibreOffice to both Android and iOS.[29]

The LibreOffice project uses a dual LGPLv3 (or later) / MPL license for new contributions to allow the license to be upgraded.[30]

LibreOffice Online will allow for the use of LibreOffice through a web browser by using the canvas element. Development is ongoing and it has not yet been released.[29] 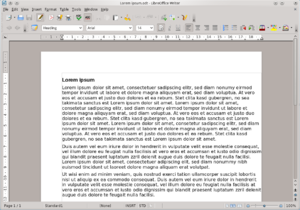 On 28 September 2010, several members of the OpenOffice.org project formed a new group called "The Document Foundation". The Document Foundation created LibreOffice from their former project in response to Oracle Corporation's purchasing of Sun Microsystems over concerns that Oracle would either discontinue OpenOffice.org, or place restrictions on it as an open source project, as it had on Sun's OpenSolaris.[31][32][33][34]

It was originally hoped that the LibreOffice name would be provisional, as Oracle was invited to become a member of The Document Foundation. Oracle rejected requests to donate the OpenOffice.org brand to the project[35] and demanded that all members of the OpenOffice.org Community Council involved with The Document Foundation step down from the OOo Community Council, citing a conflict of interest.[36]

The Go-oo project was discontinued in favour of LibreOffice.[37] Improvements made by the project were merged into LibreOffice. Also underway is the reduction of Java dependency.[38]

In June 2011 Google, SUSE, Red Hat, Freies Office Deutschland e.V., SPI and the Free Software Foundation each contributed one employee to The Document Foundation's Advisory Board to serve for an initial term of one year.[41]

LibreOffice 3.3.0 Beta 1, which was based on the beta release of OpenOffice.org 3.3, was made available on 28 September 2010 and was downloaded over 80,000 times.[42] The first stable version of 3.3 was released on 25 January 2011.[43] Because The Document Foundation and most of the software's new and former developers considered LibreOffice a direct continuation of OpenOffice.org, LibreOffice 3.3 continued the OpenOffice.org version numbering.

LibreOffice 3.3 features several functions not found in its OpenOffice.org counterpart, mainly as a result of Sun and then Oracle's requirement of assignment of copyright to themselves. Most of the features found in the 3.3 release were directly adapted from several already-created plugins, as well as the Go-oo fork. Among features unique to LibreOffice are:[44]

Version 3.4.0 was released on 3 June 2011.[46][47] Early versions of v3.4 contained some bugs, including compatibility issues with Microsoft Office, and was therefore only recommended as suitable for early adopters.[48] By 3.4.2, the release was considered suitable for enterprises.[49]

New features and improvements in 3.4 include:[50]

The Document Foundation intends to release new major versions of LibreOffice once every six months and to eventually align with the March/September schedule of the other major free software projects.[46]

The Foundation provides two different versions of LibreOffice. The latest version is available for users looking for the latest enhancements while the previous version caters to users who prefer stability.[62]

The Document Foundation estimated in September 2011 that there were 10 million users worldwide who had obtained LibreOffice via downloads or CDs. Over 90% of those are on Windows, with another 5% on Mac OS X. LibreOffice is the office suite of choice for many Linux distributions, and is installed when the operating system is installed or updated; based on IDC reckonings for new or updated Linux installations in 2011, TDF estimated a subtotal of 15 million Linux users. This gives a total estimated user base of 25 million users.[63]

In 2011 the administrative authority of the Île-de-France region, which includes the city of Paris, included LibreOffice in a USB key given to students which contains free open source software. The USB key is given to approximately 800,000 students.[29][64]

The Document Foundation has set a target of 200 million users worldwide before the end of 2020.[63]

LibreOffice was initially named BrOffice in Brazil. OpenOffice.org was distributed as BrOffice.org by the BrOffice Centre of Excellence for Free Software because of a trademark issue.[65]

Starting in 2011, The Document Foundation has organized annual the LibreOffice Conference as follows: