From FritzWiki
Jump to: navigation, search
http://fritzfreiheit.com/wiki/Jumper_(novel) is best viewed with JavaScript turned on. 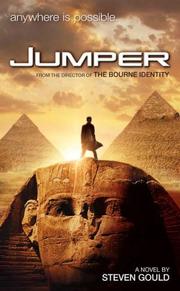 Jumper is a 1992 science fiction novel by Steven Gould. This novel was released in mass market paperback in October 1993 and rereleased in February 2008 with a movie-tie-in cover. It tells the story of Davy, a teenager who escaped an abusive household using his ability to teleport using only his thoughts. As he tries to make his way alone in the world, he looks for his long-lost mother and uses his talent for criminal activities and to foil hijackers around the globe. The book received generally positive reviews.

One evening, while being physically abused by his father, David Rice unexpectedly teleports or 'jumps' to his local library. The source of his teleportation is unexplained. Vowing to never go back to his father, he makes his way to New York. After being mugged and discovering that he cannot get a job without a birth certificate and social insurance number, David robs nearly one million dollars from a local bank. He then begins a life of reading, attending plays and eating in fancy restaurants. At a play he meets Millie Harrison and they spend some time touring New York before she returns to college in Stillwater, Oklahoma. David later visits her in Oklahoma to accompany her to a party and they begin a romantic relationship.

After intervening in the abuse of his New York neighbour living below by her policeman husband, the police start investigating Davy. The investigation leads Davy to move to Oklahoma to an apartment nearby Millie. One night while Davy is out, the police are in his New York City apartment when Millie calls, and the shock of hearing that he is being pursued by the police leads to a breakup of Millie and Davy's relationship. During this time period Davy reunites with his mother, Mary Niles, who left her family six years prior. Mary is passing through New York on a business trip. During the trip, his mother's plane is hi-jacked, and she is killed by terrorists. Davy then sets out to find the terrorist responsible for his mother's death.

Domestic Abuse - Both David and his mother are abused by his father, leading to David's mother abandoning him. The results of this abuse have many consequences for David. First, his abuse leads David to discover his ability to 'jump' or teleport. Second, it leads David to establish a life on his own requiring him to rob a bank to survive. Third, it leads him to intervene in the domestic violence of his downstairs neighbour causing the police to investigate him. Finally, the effects of his abuse strain David's relationship with his girlfriend Millie, especially when he reveals his ability to her.

A film by the same title, released on February 14, 2008, was directed by Doug Liman, with a screenplay adapted by David S. Goyer, Jim Uhls and Simon Kinberg. It starred Hayden Christensen, Samuel L. Jackson, Rachel Bilson, and Jamie Bell. The beginning of the film follows the early plot of the novel with respect to Davy's home life and discovery of jumping, but from there follows Davey's life as an adult and expands upon a different story. Most of the characters are presented in modified ways from the book.

Jumper was number 94 on the American Library Association's 100 Most Frequently Challenged Books of 1990–1999.[1] Gould said: "considering that it wasn't published until the latter half of 1992, it had to work extra hard."[2] The book was listed for the graphic description of David's abuse at the start of the book (page 2) and the description of David's debate about killing his passed out father (page 9)[3]

A 2004 sequel to the novel, Reflex, continues the story of David as an adult.

In 2007, Jumper: Griffin's Story told the tale of another "jumper" character from the film version of the novel, and serves as a spin-off. There is also a video game of the same name released in 2008. Both titles take place in the film's universe, and not that of the novels.