From FritzWiki
(Redirected from Alexander Dumas)
Jump to: navigation, search
http://fritzfreiheit.com/wiki/Alexandre_Dumas,_p%C3%A8re is best viewed with JavaScript turned on.

Alexandre Dumas, père (French for "father", akin to 'Senior' in English), born Dumas Davy de la Pailleterie (24 July 1802 — 5 December 1870) was a French writer, best known for his numerous historical novels of high adventure which have made him one of the most widely read French authors in the world. Many of his novels, including The Count of Monte Cristo, The Three Musketeers, Twenty Years After, and The Vicomte de Bragelonne were serialized. He also wrote plays and magazine articles and was a prolific correspondent.

Alexandre Dumas was born in the village of Villers-Cotterêts in the department of Aisne, northeast of Paris, France, Europe.

Dumas' paternal grandparents were Marquis Alexandre-Antoine Davy de la Pailleterie, a French nobleman and Général commissaire in the Artillery in the colony of Saint Domingue (now Haiti), and Marie-Cesette Dumas, an Afro-Caribbean former slave.[1][2] Their son, Thomas-Alexandre Dumas, married Marie-Louise Élisabeth Labouret, the daughter of an innkeeper. Thomas-Alexandre was a general in Napoleon's army who fell into disfavor, rendering his family impoverished.

By the time young Dumas was born his family had lost all pretensions to wealth, and his widowed mother struggled to give him a decent education. General Dumas died in 1806 when Alexandre was three and a half years old. Although Marie-Louise was unable to provide her son with much in the way of education, it did not hinder young Alexandre's love of books, and he read everything he could get his hands on.

While Dumas was growing up, his mother's stories of his father's brave military acts during the glory years of Napoleon I of France spawned Alexandre's vivid imagination for adventure and heroes. Although poor, the family still had the father's distinguished reputation and aristocratic connections, and in 1822, after the restoration of the monarchy, twenty-year-old Alexandre Dumas moved to Paris, where he obtained employment at the Palais Royal in the office of the powerful duc d'Orléans (Louis Philippe).

While working in Paris, Dumas began to write articles for magazines as well as plays for the theater. In 1829 his first solo play, Henry III and his Court, was produced, meeting with great public acclaim. The following year his second play, Christine, proved equally popular, and as a result, he was financially able to work full time at writing. In 1830, he participated in the revolution that ousted King Charles X and replaced him on the throne with Dumas' former employer, the duc d'Orléans, who would rule as Louis-Philippe, the Citizen King.

Until the mid-1830s, life in France remained unsettled with sporadic riots by disgruntled Republicans and impoverished urban workers seeking change. As life slowly returned to normal, the nation began to industrialize and, with an improving economy combined with the end of press censorship, the times turned out to be very rewarding for the skills of Alexandre Dumas.

After writing more successful plays, he turned his efforts to novels. Although attracted to an extravagant lifestyle, and always spending more than he earned, Dumas proved to be a very astute business marketer. With high demand from newspapers for serial novels, in 1838, he simply rewrote one of his plays to create his first serial novel. Titled Le Capitaine Paul, it led to his forming a production studio that turned out hundreds of stories, all subject to his personal input and direction.

From 1839 to 1841, Dumas, with the assistance of several friends, compiled Celebrated Crimes, an eight-volume collection of essays on famous criminals and crimes from European history, including essays on Beatrice Cenci, Martin Guerre, Cesare and Lucrezia Borgia and more recent incidents including the cases of executed alleged murderers Karl Ludwig Sand and Antoine François Desrues.

Dumas also collaborated with his fencing master Augustin Grisier in his 1840 novel The Fencing Master. The story is written to be Grisier's narrated account of how he came to be witness to events in the Decembrist revolt in Russia. This novel was eventually banned in Russia by Czar Nicholas I of Russia, causing Dumas to be forbidden to visit Russia until the Czar's death. Grisier is also mentioned with great respect in both The Count of Monte Cristo and The Corsican Brothers as well as Dumas' memoirs.

On 1 February 1840, he married an actress, Ida Ferrier, born Marguerite-Joséphine Ferrand (1811—1859) but continued with his numerous liaisons with other women, fathering at least four illegitimate children. One of those children, a son named after him, whose mother was Marie-Laure-Catherine Labay (1794—1868), a dressmaker, would follow in his footsteps, also becoming a successful novelist and playwright. Because of their same name and occupation, to distinguish them, one is referred to as Alexandre Dumas, père, the other as Alexandre Dumas, fils. His three other children were Marie-Alexandrine Dumas (5 March, 1831—1878), who later married Pierre Petel and daughter of Belle Krelsamer (1803—1875), Micaëlla-Clélie-Josepha-Élisabeth Cordier, born in 1860 and daughter of Emélie Cordier, and Henry Bauer, born of an unknown mother.

Dumas made extensive use of the aid of numerous assistants and collaborators, of which Auguste Maquet was the best known. It was Maquet who outlined the plot of The Count of Monte Cristo and made substantial contributions to The Three Musketeers and its sequels, as well as several of Dumas' other novels. When working together, Maquet proposed plots and wrote drafts, while Dumas added the details, dialogues, and the final chapters. 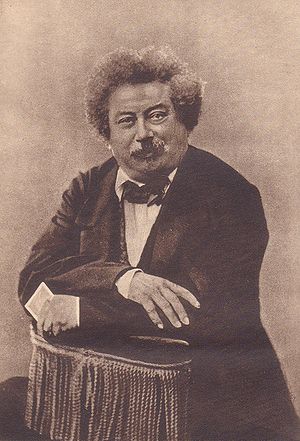 Dumas' writing earned him a great deal of money, but Dumas was frequently broke or in debt as a result of spending lavishly on women and high living. The large and costly Château de Monte-Cristo that he built was often filled with strangers and acquaintances who took advantage of his generosity.

When King Louis-Philippe was ousted in a revolt, Dumas was not looked upon favorably by the newly elected President, Louis-Napoléon Bonaparte. In 1851 Dumas fled to Brussels, Belgium, to escape his creditors, and from there he traveled to Russia where French was the second language and his writings were enormously popular. Dumas spent two years in Russia before moving on to seek adventure and fodder for more stories. In March of 1861, the kingdom of Italy was proclaimed, with Victor Emmanuel II as its king. For the next three years, Alexandre Dumas would be involved in the fight for a united Italy, founding and leading a newspaper named Indipendente and returning to Paris in 1864.

Despite Alexandre Dumas' success and aristocratic connections, his being of mixed-race would affect him all his life. In 1843, he wrote a short novel, Georges, that addressed some of the issues of race and the effects of colonialism. He once remarked to a man who insulted him about his mixed-race background:

In June 2005, Dumas' recently-discovered last novel The Knight of Sainte-Hermine went on sale in France. Within the story, Dumas describes the Battle of Trafalgar in which the death of Lord Nelson is explained. The novel was being published serially and was almost complete by the time of his death. A final two-and-a-half chapters were written by modern-day Dumas scholar Claude Schopp who based his efforts on Dumas' pre-writing notes.[5]

Buried where he had been born, Alexandre Dumas remained in the cemetery at Villers-Cotterêts until 30 November 2002. Under orders of the French President, Jacques Chirac, his body was exhumed, and in a televised ceremony, his new coffin, draped in a blue-velvet cloth and flanked by four Republican Guards costumed as the Musketeers - Athos, Porthos, Aramis, and D'Artagnan - was transported in a solemn procession to the Panthéon of Paris, the great mausoleum where French luminaries are interred. In his speech, President Chirac said:

"With you, we were D'Artagnan, Monte Cristo, or Balsamo, riding along the roads of France, touring battlefields, visiting palaces and castles—with you, we dream."[6]

In that speech, President Chirac acknowledged the racism that had existed, saying that a wrong had now been righted with Alexandre Dumas enshrined alongside fellow authors Victor Hugo and Emile Zola.[6] The honor recognized that although France has produced many great writers, none have been as widely read as Alexandre Dumas. His stories have been translated into almost a hundred languages, and have inspired more than 200 motion pictures.[7]

Alexandre Dumas' home outside of Paris, the Château de Monte-Cristo, has been restored and is open to the public.

The Alexandre Dumas (Paris Métro) station was renamed in his honor in 1970.

Alexandre Dumas, père wrote stories and historical chronicles of high adventure that captured the imagination of the French public who eagerly waited to purchase the continuing sagas. A few of these works are:

Although best known now as a novelist, Dumas earned his first fame as a dramatist. His Henri III et sa cour (1829) was the first of the great Romantic historical dramas produced on the Paris stage, preceding Victor Hugo's more famous Hernani (1830). Produced at the Comédie-Française and starring the famous Mademoiselle Mars, Dumas' play was an enormous success, launching him on his career. It had fifty performances over the next year, extraordinary at the time.

Other hits followed. For example, Antony (1831), a drama with a contemporary Byronic hero, is considered the first non-historical Romantic drama. It starred Mars' great rival Marie Dorval. There were also La Tour de Nesle (1832), another historical melodrama; and Kean (1836), based on the life of the great, and recently deceased, English actor Edmund Kean, played in turn by the great French actor Frédérick Lemaître. Dumas wrote many more plays and dramatized several of his own novels.

Dumas was also a prolific writer of non-fiction. He wrote journal articles on politics and culture, and books on French history.

He was also a well-known travel writer, writing such books as